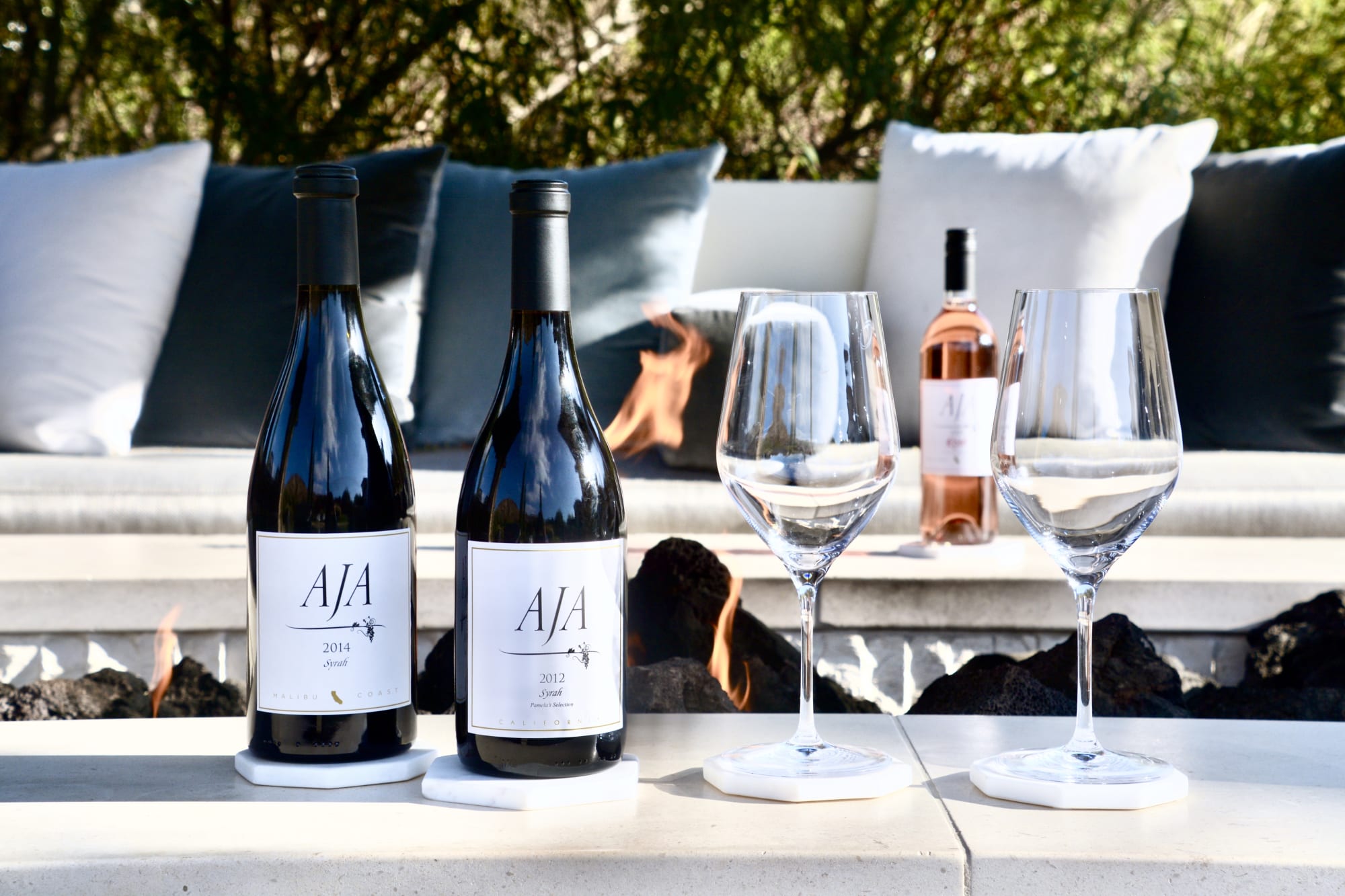 A father-daughter duo making wine from the Malibu Coast

We make pristine wines from the hillsides of our Malibu Estate. We are a family business through-and-through, run by myself (Amanda), my father (Todd), my mother (Heather), and my brothers (Alec and Jack).

Give the gift of AJA Vineyards. Add a personalized gift note to any of our wines during checkout!

Each season we select for you 3 wines to be purchased as a bundle at a low cost with FREE shipping. This brings to you a taste of the Malibu Coast. We hope you enjoy this season's selection.

Located in the serene nature of the Santa Monica Mountains one can find robust vineyards, fruiting endlessly and rapidly on the hillsides of our Malibu Estate.
Founded by Todd and Heather Greenbaum, AJA Vineyards was created out of a passion and love for the art of wine.
In 2007 Syrah and Cabernet vines were planted to the hillside estate. In 2010 Todd and Heather purchased the estate just in time for the first harvest. They quickly found a team to help them harvest that first vintage and founded AJA the following year in 2011.
Todd carefully studied the soil and selected vines from his favorite varietals that best grow in the area. In 2013 he begun to plant Cabernet Sauvignon, Cabernet Franc, Malbec, Merlot and Petit Verdot vines on the hills of the estate. And in 2018, Sauvignon Blanc was planted doubling the size of our vineyards.
All of his hard work and excitement was nearly destroyed when the devasting Woolsey Fires surrounded the vineyards in 2018. After nearly two months of uncertainty, a message came. By some miracle, the vineyards, and the estate were unscathed. The vineyard then earned its name as the Miracle Vineyard both for this Miracle and for Heather’s mother Doreen who we call the Miracle Maker. It is an old tradition that if you match three couples to marriage, you are given a ticket to heaven. Doreen has matched four.
Each vineyard was thus named for Heather and Todd’s parents: Pamela’s our original vineyard of Syrah and Cabernet Sauvignon, Miracle, and Ed’s for Heather and Todd’s fathers Edward and Edwin.
Family is very important to the AJA recipe. It is in the name. AJA is an acronym for the names of Todd and Heather's three children, Alec, Jack, and Amanda whom are their greatest treasures. And that’s why the “J” in AJA is pronounced like the “s” in treasure. Amanda, being the eldest, was attracted to wine at a very young age. As the winery grew, Amanda grew with it helping Todd as a father daughter duo while studying in school.
After graduating from UCLA, she studied wine at the International Culinary Center and became a Certified Sommelier, interned with winemakers across the globe, and became an advocate for millennials in the wine and spirits industry.
Inspired by family, Amanda has devoted her life’s work to crafting the best wines of the Malibu Coast and currently runs all operations at the winery walking in the footsteps of her father.
When one tastes our wine, they catch the smell of sweetness, the taste of serenity, and a slight bitterness to remind us that at times, not everything is perfect. These elements are all harnessed in the passion to make great wine that brings friends and families together.

What our community says

"A father-daughter duo making wine on the Malibu Coast, this wine is anything but ordinary. Amanda, the "daughter" part of the duo is an incredible force in the wine industry, constantly advocating for positive change and inclusion. "

"AJA Vineyards is a daughter-father venture located in the Malibu Coast AVA. Most of their grapes are estate grown and their wines are lively, refreshing and fun – just like southern California.   "

"Husband and wife team operating in the Malibu Coast AVA of Southern California."